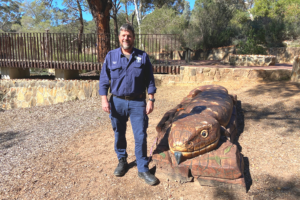 Paul Udinga’s family loved exploring the outdoors when he was a kid and were frequent visitors to John Forrest National Park. Little did he know he’d eventually become a custodian of the park, in the form of a ranger!

Paul has been the Senior Ranger at John Forrest National Park for almost 10 years and directly associated with the park for even longer. He showed us around, shared some wonderful memories and took us through the ins-and-outs of ranger life.

“My first experience with national parks was probably John Forest National Park,” Paul shared as we chatted in the Rangers’ office. “My parents quite liked going out to the bush on the weekend, and they used to bring me up here.”

John Forrest National Park looked quite different back then. There’s a lot of interpretive signage at the park that tells the story of its history to visitors – even some of the rubbish bins in the picnic area are wrapped in black and white photos taken as early as the 1930s.

When we decided to take our chat out into the park, Paul stopped beside one of the bins.

“There’s a really awesome photo here that shows when the railway was the main access into the national park, and one of the local newspapers sponsored a picnic day. They had something like 2500 people come up on the train,” he said, gesturing to a photo featuring a crowd of people sitting around Jane Brook weir.

“So, this was back in the day when that was a swimming pool – oh, I’ve never actually noticed that.” Paul paused. “That’s the diving board! I can remember jumping off that diving board regularly.” 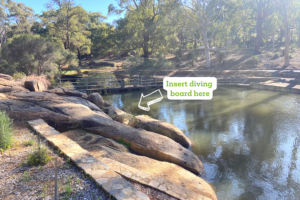 He recalled his other favourite activities as a kid in John Forrest National Park.

“We’ve got what we refer to as the fairy huts, these little picnic huts around the park. And you know, they were forts, they were houses, they were all sorts of things in our playtime. We’d climb about the granite outcrops, looking for gaps in the rocks that we could pretend were bat caves. We’d go up and down Jane Brook, looking for ways to get from one side of the creek to the other with steppingstones or logs or whatever we could find and, you know, ultimately slipping off.” 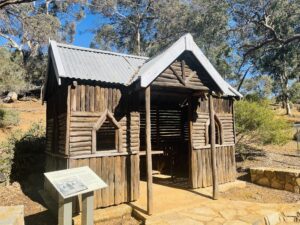 It was this kind of adventuring at a young age that started Paul’s dream of becoming a ranger.

“My father had a Volkswagen Kombi. He would fit as many of the local kids into it as he could and drive us up to John Forrest. So, that’s how myself and a whole bunch of friends got introduced to the park. I guess that’s what inspired me to pursue a career in national park management,” he said.

And at 26, Paul scored a traineeship as a national park ranger. For a while, he worked as a mobile ranger, travelling from parks like Kununurra all the way down to Esperance – wherever he was required that season. Then he accepted permanent positions at Karijini and Nambung National Park, before landing his role at John Forrest National Park. 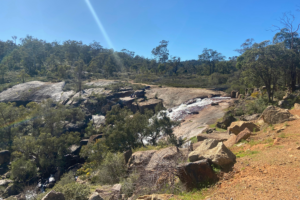 When we asked about his day-to-day duties, Paul explained that being a ranger isn’t exactly what a lot of people expect.

“I describe our job as being people management. And I base that on the fact that the natural environment has been doing perfectly well on its own for hundreds of thousands of years. It’s the impact that people have on the environment that we need to manage.”

The rangers do this by creating and maintaining areas that allow people to experience the park safely, with minimal negative impacts on the environment – like walk trails, bike trails, toilets, recreation areas and picnic areas.

“For example, walk trails get people to walk on hardened tracks, rather than creating their own and causing erosion problems. And yesterday, we had to remove some trees that had fallen onto a couple of the trails,” Paul said.

But of course, one of his favourite things about his job is sharing his knowledge and passion for the park with visitors.

“Myself and the staff here are very passionate about the park, and we enjoy sharing that. We do our best to make sure that visitors of the park get something out of their visit. If we can enhance that by giving them a few extra tips, like suggesting where they can walk to see some wildflowers or encounter a Splendid Fairy-wren, we enjoy that part of the job as well.”

The nature playground and fairy huts are, or course, great for keeping the kids entertained. But there are plenty of hidden treasures to look out for – including a secret stairway! 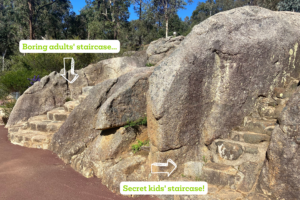 “This is one of my favourite little spots through here,” Paul said, “because the very first rangers of the park obviously had a real sense of what it was like to be a child. And it’s that sense of fun, that sense of doing something that maybe the adults can’t get to that kids love. It’s relatively safe, but it’s just hidden enough to make it special.”

For some more imaginative play, dotted along the Glen Brook are some small (and we mean small – following the ‘fairy’ theme!) bridges, that were also created in the early days of the park.

“I think a little bridge like this is a fantastic thing for kids to discover. These days, we wouldn’t grab materials from within the park, but back in the 40s, they didn’t have the opportunity to use ready materials or building materials. So, they made everything out of what they could find around the place,” Paul explained. 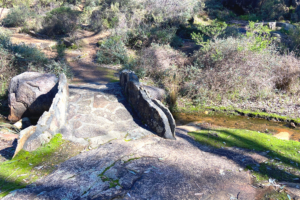 Have you ever heard of a trigger plant? They’re one of Paul’s favourite things to show visitors. Most of the trigger plants in the world can be found in WA, and there are plenty in the park! But you might need Paul or another ranger to help you find one (visitors must stick to established trails and not disturb plants or animals).

“I love showing people the trigger plants. Especially if they’ve never seen one, or if they don’t know what I’m talking about. It’s great for the kids, as they can actually see a plant doing something!” Paul said, before explaining just what a trigger plant is.

“Trigger plants want to make sure that their pollen sticks to the insect. So, their stamen curls right back and is sort of spring loaded. When the insect lands in the middle of the flower and starts looking for the nectar, it’ll trigger some of the hairs in the middle, and that stamen will then be triggered – it will spring down and dob a bit of pollen on the back of the insect!”

To see a trigger plant in action, check out this video from World Wildlife Fund!

Nature Play WA would like to thank Paul Udinga for taking the time to chat with us and share his incredible knowledge of John Forrest National Park.