Mike Robinson is the Chair of member-run group, Friends of Upper Lesmurdie Falls (FOULF). They’re on a mission to restore native flora, undertake structural rehabilitation, improve the amenities and acknowledge the history at Mundy Regional Park.

We were lucky enough to take a walk around the park with Mike. With a wealth of knowledge under his belt, he pointed out the beautiful flora and fauna, just some of the incredible work he and his team have done, and some wonderful historic and kid-friendly spots.

From gutter to creek, and cockatoos in trees

“When we (FOULF) came down here and started, the creek was just a gutter. We’ve completely taken out the creek banks because the vertical sides were collapsing or gone. So, we’ve done a lot of structural work and weeding and replanting to rehabilitate the creek,” he said.

They’ve also added riffles (where water tumbles over rocks) at points along the creek. These create nooks and crannies for creatures to live in and encourage water aeration, which has seen gilgies and even turtles find a home in the creek. 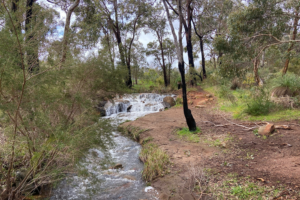 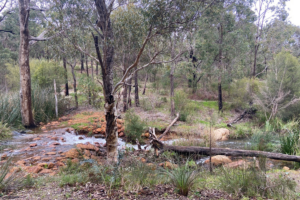 FOULF began replanting natives in the park in 2016. As we passed some beautiful trees called Hakea petiolaris, we came to a stop and Mike shared a lovely full-circle moment.

“These (referring to the trees) are the very first things we ever planted. And then, two years ago, we came down here one evening. For the first time, we saw red-tailed black cockatoos all throughout them, feeding on the nuts. It was a really good moment.”

The Lesmurdie Brook Loop is situated in the eastern section of the park, putting a little distance between visitors to this area and the main tourist attraction, Lesmurdie Falls. It’s a superb spot for families given it’s a little quieter, and the changes made by FOULF that have gone a long way in encouraging play.  Mike shared the way they replanted natives and altered the direction of the trail to both protect the creek and make it a place of fun and exploration.

“We’ve tried to make the creek accessible at points, and then take people away from it at other points. So, there are wild areas where the creek can remain undisturbed, and bare areas, if you like, so the kids can get in – and they do! They come down with their little nets, catch things, they play with mud, get wet and dirty and have a great time.

The riffles we’ve added ensure there are small pools of water all-year-round, so children can always come and play.”

Also along the Loop are two fantastic areas of tree trunks and branches (pictured below). FOULF turned these fallen marri and wandoo trees into places for kids to test their climbing and balancing skills, and let their imagination run wild. 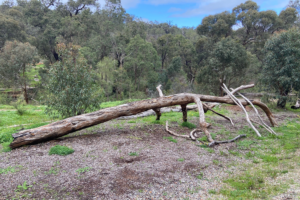 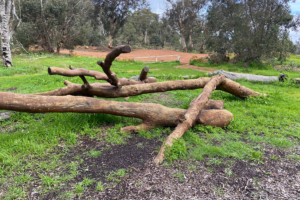 Growing up in Pemberton, nature has always been important to Mike. As we strolled through the park, he told us a bit about his childhood.

“My dad used to take us out all the time. It sounds criminal, but we used to come back with bunches of wildflowers. That’s what you did in those days, but now of course, that’s absolutely verboten. But I spent a lot of time outdoors as a kid, and while we were exploring and gathering stuff that we shouldn’t have been, I was learning.”

Then, in 2012, Mike was approached by Parks and Wildlife and asked if he’d like to start a group that would work to rehabilitate and maintain the area of Upper Lesmurdie Falls. Given he lived on the boundary of Mundy Regional Park, his knowledge of plants from his work in the Department of Agriculture, and his love for nature, it seemed he was a good fit for the job!

Now, Friends of Upper Lesmurdie Falls has 150 members, of which about 30 actively work on maintenance and rehabilitation of the park. 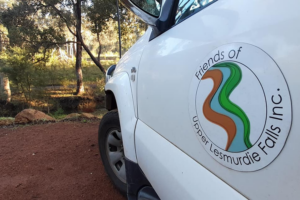 There are a few cleared areas and old brick structures upstream of the falls. And, unless you know where to look, you might not even notice them at all!

But we had Mike with us, who would point them out knowingly and proceed to share all he’d discovered about each area.

Did you know there were five houses built in the park from the 1930s onwards? While some are expected to have been the blocks of Aussie battlers, at least one was owned by a Member of Parliament and war hero – Hon AVR Abbott. His block featured an almost pool-like structure, which FOULF have restructured and maintained – check it out below! 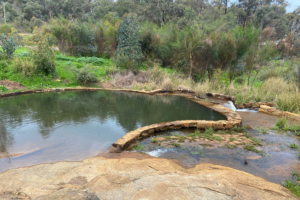 Mike also brought our attention to a small hole in the earth with a channel running from it, amongst the trees and bush. While it looked rather unassuming to us, it had previously caught Mike’s eye, and he asked his geologist brother to take a look.

“I said to him, ‘can you think of any explanation for that?’ And he said, ‘yeah, they’ve been panning for gold!’ And he hopped down to the bottom of the hole, dug around, and sure enough, there was quartz,” Mike said.

In an area not far from the foot of Lesmurdie Falls was a more determined attempt to establish a gold mine, Mike explained, though they never found enough to keep it going. However, a story he was told by an elderly lady who lived here as a child suggests otherwise!

“She said that somebody used to come up once a year and get enough gold from here to keep them going for the rest of the year. I’m not sure how much of that story is the truth, but if you can just accept it for what it is, it’s a good story.” 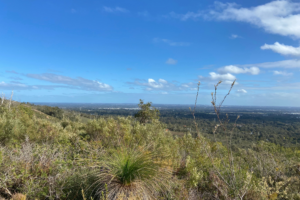 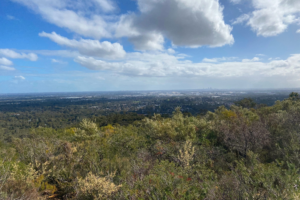 As we passed the Lesmurdie Falls Picnic Area, we crossed a bridge over the brook and continued on a paved path up a hill. When we reached the top, we had spectacular, uninterrupted views of the entire Perth region, all the way to the coast (pictured above).

Mike explained that he’d learnt that it was from this area that Aboriginal people could spot fires burning and know whose fire it was. You can listen to Aboriginal Elder, Neville Collard, talk more about the Indigenous history at Mundy Regional Park by clicking here (link: https://www.perthnrm.com/blog/2018/06/25/noongar-stories-lesmurdie-falls-stories/).

Nature Play WA would like to thank Mike Robinson for taking the time to chat with us and share his incredible knowledge of the Mundy Regional Park area. If you’d like to join or learn more about Friends of Upper Lesmurdie Falls, you can click here (link: https://friendsofupperlesmurdiefalls.org/). There are also regular busy bees for the public to attend, which you can stay up to date with on their Facebook page (link: https://www.facebook.com/friendsofupperlesmurdiefalls/).